Steve Ballmer doesn't think Microsoft's days are past, but is anyone else listening, or agreeing, with him today...?

I had a spontaneous, unplanned, meeting with another tech consultant yesterday. He and I are both middle aged technology guys whose career paths while not identical, have more similarities than differences. I happened to be sharing the same bar with this gentleman, his wife, and a couple others on an uncommonly balmy afternoon in Nashville earlier this week. Our conversation turned to technology issues and it became clear we were indeed friendly competitors each with a long history and perspective on the industry-- past and present.

One of several comments my new found friend made, caused me to reflect. He said, "Microsoft is just plain boring and a PITA (my abbreviation) to work on." He reflected that years, indeed decades, of working with Microsoft server technologies including Exchange Server, Windows Server and Small Business Server, hasn't gotten any easier for IT experts or our customers. Microsoft's products  seem too complex, bloated and expensive today. He lamented that Exchange Server, especially for small offices, hasn't kept up with the times and needs of its customers. (I agree and we both encourage our current and potential clients to utilize hosted Exchange Server solutions which minimize upfront costs and ongoing maintenance and security issues. If you are interested in Hosted Exchange for two to two thousand, please contact Music Row Tech directly to discuss pricing, service, and other benefits.)


More troubling, he stated, "Microsoft is dead." This comment really got me thinking..... Here I was sitting, a thirty plus year veteran of "the technology wars," with an iPad, an iPhone 4S, running Apple's latest mobile operating systems, I had a half dozen Apps running-- none of which were authored by Microsoft or even indirectly rely upon Redmond technology-- this got me contemplating the passing of an era and a significant chapter of my own career....


The discussion continued. We agreed on several points (and disagreed on a few others).

Over the past five plus years under Ballmer's watch, Microsoft has been abysmally slow to recognize trends. Specifically, Microsoft has all but missed the tidal movement to SmartPhones and tablets. Yes, we both agreed that Microsoft's mobile platform, "Mango," has a lot going for it. We also agreed it is almost certainly too little, too late. Worse, Windows 8, which is still likely a year away from public release!, is Microsoft's first real shot at a bonafide, tablet friendly, operating system. As the lumbering elephant in Redmond continues through its series of beta releases, Apple and Google, gobble up market and mind share in the mobile marketplace. It is true, in the technology consulting world of today, mobile, web, Android and Apple, are where all the action, excitement and interest lie. Pitching Microsoft centric solutions seems dated and out of touch. I wouldn't have believed I would be writing these words when my career began in earnest in the mid-1980's.

This made me reflect on a more fundamental level. When was the last time I was excited about a Microsoft product release....? I really had to think about this. I suppose on some level it was Windows 7. Truthfully, not so much because of some whiz bang set of new features (and there elements of this operating system which I do truly like), but because it was the "answer" to the anemic Vista platform and ever so long in the tooth, Windows XP. In other words, Windows 7 was a potential answer to a series of products my customers increasingly disliked for various reasons. It wasn't exciting per se, just a solution to expensive, "self-inflicted," missteps by Ballmer and his crew. Yet even today as I make an increasingly infrequent on site visit to client offices, if I see Windows boxes, the majority are still running an amalgam of Windows XP and Vista; very few clients have even upgraded Office beyond the 2003 (and perhaps 2007) releases. Any discussion of upgrading even to what is now dated Windows 7 and Office 2010, is met with eye rolling,  pained, expressions.

Contrast this with the anticipation I have felt several times over the same  years when a shiny new "toy" from Apple makes its way to my front door. No comparison! Talk with a new client about the possibility of untethering from the desk and being truly productive using an iPad and a variety of "off the shelf" solutions and eyes light up with anticipation and possibility!

Candidly, Microsoft's lethargic pace of innovation is even worse on the small business front. No one, I mean no one, is happy to ask me, my new friend, or anyone in my field, to come to their office and "fix" various network and software issues which often can only be resolved by digging deep into the bowels of various Microsoft operating system settings. This process is akin to finding and working with a mechanic on a broken vehicle. Getting the car to "just work" so you can get from one destination to another is perceived as a painful expense and necessary evil, nothing more. This isn't to say people don't want a good mechanic that they truly trust, they do!, you still rarely are excited to pick up the 'phone and say, "Hello."

I have made a decent living through the years fixing various problems relating to WinTel based networks. In fact, Microsoft in many ways created the building blocks for much of my past business. What has changed is my clients are no longer content to be shackled to Microsoft's expensive, complex, software, and I am no longer excited about working in this area. This "boat" has sailed and it seems only Bill Gates,  Steve Ballmer, and hoards of engineers working on the next iterations of last year's products, don't realize it....

My bar room friend mentioned that Microsoft was laying off thousands of engineers. Looking at the news today, I don't see that. However, there are credible reports of the company laying off a couple of hundred employees. This is a very, very, small percentage of the company's 92,000 or so worldwide employees. However, layoffs of any kind  is certainly not a sign of growth and prosperity.

The stock market seems to agree. As the nearby graph shows, Microsoft's stock has languished over the past ten years. With a market cap of over $250 billion, plenty of cash and an operating margin hovering around 25%, no one is going to worry about this company's financial health. But the picture is clear, Microsoft is living off the fat profit margins of its cash cows-- Windows OS and Microsoft Office. It has been over a decade since the market has built any "upside surprise" into the stock's valuation. 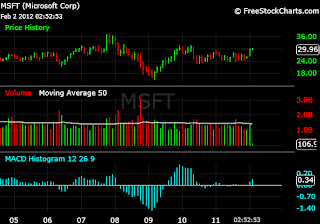 Does Microsoft still have a place in the IT world? Sure. The majority of existing small and medium sized businesses operating in the USA today rely on Microsoft technology to operate. This fact isn't going to materially change for quite some time. Long after I retire there will still be a need for technology consultants focused on maintaining these networks.

Today's new start ups, the small businesses which our country desperately needs to innovate and create jobs, don't want to be shackled by Microsoft's technology model. They want mobility, instant, anywhere, data access. The want it to "just work" without monolithic on site hardware investments and a cost line for in-house technical staffs. They want flexibility to change, update, remix, on the fly. In other words, they see technology is a tool to be used to maximize their efficiency and connectivity. Cubicles filled with beige desktops tied to servers hidden away overheating a closet down the hall is so last century.....

There are ways of marrying the best of the old with the new, but this is a discussion for another day. What are your thoughts? Has Microsoft delivered anything which has excited you lately? Are you going to jump on board Windows 8 when it finally arrives? Is it time for Microsoft to consider breaking up not because of monopoly concerns, but to potentially unlock shareholder value and innovation? I welcome your comments!

I currently participate in the Amazon Associates Program and certain item links included within this post may tie to this affiliate program.

Music Row Tech will never sell, give away or use your personal information with third parties.