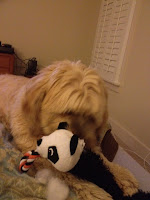 Taking a quick pic of your pooch and having it appear on your iPad, computer and Apple TV without any extra steps on your part sounds nearly too good to be true, and for some users of Apple's recently released PhotoStream, it is.... I have written several posts about my real world user experiences with various elements of Apple's recently released iCloud services. To date, I have found some elements to work as promised and enhance the Apple iDevice promise. Other pieces of iCloud have not been nearly as useful, and in some cases have proven to be a greater drain to productivity than real world time saver......

I believe my use of these services in a mixed environment-- combining a number of iDevices (iPhones, iPads and iTvs) with Windows machines (operating a fully patched copy of  Windows 7 in my testing environment), has caused at least some of my difficulties with iCloud services. I maintain this is a very typical operating environment, especially with mainstream small businesses and households.

Even if you are able to perform all of your computing needs using Apple devices-- and software availability often make this an impossibility-- using a Windows computer is still by far the most common computing environment in the world. As the nearby graph shows, despite what Apple and its legion fans would have you believe, the desktop operating system "war" is still handily won by Microsoft! In fact, the aging XP operating system still has more users worldwide than any other OS. For all but a few niche markets such as professional video editing, Windows remains the dominant operating system in use around the world today. Creating services such as iCloud which aren't rock solid for Windows users is a recipe for user dissatisfaction.

Why is this important to this discussion? This "mixed use" environment is Apple's biggest client base and problems such as this need to be squarely in Apple's focus, not a peripheral engineering challenge. As much as I like Apple products and this company's customer relations, too often I feel like "the answer" to this issue and others is, "Just buy a Mac and your problems will vanish!" Well, that isn't an answer, nor is it a satisfying solution to real world compatibility issues for everyday, real world, consumers.

So what's today's problem point? PhotoStream. The concept is wonderful, another potential problem solver which has the promise of working with Apple devices more convenient and "friendly" than Android, Windows, or any other platform. I love photography, I have been an amateur photo buff for nearly fifty years. My grandfather gave me my first Kodak box camera when I was about five, I have been clicking and preserving moments ever since.

One of my saddest losses in life (in terms of belongings anyway) is a box stuffed with thousands of photos and negatives, mostly black and white prints I took, developed, and enlarged myself during my childhood. I still have boxes in my garage from decades ago which have been moved countless times and rarely, if ever, see the light of day. But that priceless (to me anyway) box of prints is long gone, a victim of my neglect in some move during my college years "eons" ago.

Digital photography should make sharing and archiving photos infinitely easier than the Kodak moments of past generations. Sadly, digital doesn't mean timeless in many cases. All too many photos snapped on digital cameras, especially ubiquitous camera phones, never get backed up or synced leaving them susceptible.  Broken, lost, or damaged devices are commonplace. I know many very smart individuals who never back up their smartphone data!  If you haven't ever lost a digital photo you are either very diligent or very lucky. Photostream has the potential of making your photos easy to share and effortlessly backed up.

Here's the theory, snap a pic on your iDevice (iPhone or iPad2). This photo will then sync "instantly" through Apple's servers to your other iDevice(s) making them visible for sharing and editing without manual syncing, wires, or third party applications. When your iDevice is on your local wi-fi network these photos will also sync to your local Mac or Windows PC. (These transferred files will be uncompressed, exact copies rather than the compressed, optimized, version transferred between your iDevices.) PhotoStream is a two way street; you can add photos from your computer library to share on your iDevice(s) by placing these pics in a folder designated for this purpose in iCloud.

That's "the theory" but there are some real limitations and caveats even when everything is working as "advertised:"


If the above limitations aren't a deterrent, PhotoStream is free and has many obvious advantages and applications. However, PhotoStream has been more like a log jammed river for me. After installation,  PhotoStream seemed to work across my iDevices and Windnows PC using "photostream\download" and "photostream\upload" folders on my local drive under the "\User Account\My Pictures" folder structure. Great.... For about ten days! Mysteriously, the sync process stopped between my iDevices and my Windows box. Nothing changed (that I was aware of); just no new photos showed up in my "PhotoStream\Downloads" folder.....

Several hours of troubleshooting later, I have resolved the problem (for the moment) and learned a few things along the way. First and foremost, I am not alone with this issue. There are many threads discussing this topic on Apple's Support forums and elsewhere. This thread alone has well over 25,000 views and counting. My experience suggests for every individual reading, much less participating, in these forums, there are at least ten times this number of frustrated, casual, users who never reach out to these forums for guidance (and yes, this is a highly subjective, unscientific, estimate).

There are many solutions included in the above mentioned thread alone. Many contributors have slogged through possible resolutions and shared their expertise. There is a notable absence of official comment from Apple Support on this problem which is disconcerting.... So what worked for me?

Ultimately, these steps have PhotoStream working once again for me:

Turn off Photostream.
Stop all Apple iCloud services from Task Manager by highlighting them and selecting end process:


I currently participate in the Amazon Associates Program and certain item links included within this post may tie to this affiliate program.

Music Row Tech will never sell, give away or use your personal information with third parties.