One Purchase Which Won't Wait For Amazon! 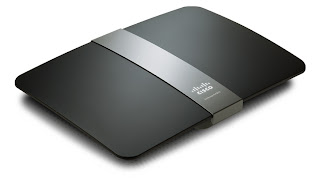 I run my small business out of my home. Since a significant part of my expertise lies in using and configuring small office network equipment and making the newest tablets and smartphones "play nicely" with your business  and personal needs, reliable network access is a must. One of the most critical and often forgotten pieces of the SOHO network is the router.

Many people "just want it to work" and have only a passing understanding that the router, cable modem, and possibly a network switch (or several) are actually distinctly different pieces of hardware and perform interrelated, but not duplicative, duties. The "I just want it to work crowd," often has to be reminded where these blinking boxes reside and when network problems arise (and they do as surely as the sun will set tonight in the west), a careful review of those LED indicators is always a good place to begin the process of isolating the immediate problem.

Ironically, as I posted on Google+ a day or two ago, I swapped out my leased Comcast cable modem for a newly purchased Motorola unit this week. If you haven't considered investing in your own cable modem, I encourage you to do so. This Motorola 6121 cable modem is a good unit with all the technical specifications you need to worry about for the next two to three years (and get yourself a 150% or better ROI on the switch). I did this primarily on principal. My review of Comcast charges was an eye opener (which is probably why I avoid studying this bill, like so many necessary but unpleasant chores in life). That $7/month fee gnawed at me until I could get a new, superior, modem in place and delivered the old POS ("piece of sH*%) hardware to Comcast's local headquarters (they don't make it "easy" to return overpriced equipment and get it off your bill!).

After a pretty painless set up, two days passed. I don't know if it was the network gods playing a trick, or if my Linksys router was "mad" because it didn't get any upgrade, but low and behold last night it gave up the ghost. Now routers in my SOHO office (and I suspect your office and home!) are 24/7 workhorses!

Routinely, I have three or more computers, an iPhone, an iPad, a Kindle Fire, four (4)! TIVOS, all making use of my network all the time! If I have a client, guest, or daughter in the house the "network count" goes up even further!

My home and attached office are of fairly new construction (less than three years old) and my builder was a believer in wiring for today and tomorrow (or he was building this place with me in mind!). Every room, save bathrooms, has high quality Category 6 ethernet cable installed. There are no traditional POTS telephone lines, but they aren't needed or wanted. He also pre-wired  the ceiling in the livingroom for  5.1 speakers and some other thoughtful touches (which helped sell this place! I hope any General Contractors out there are listening!).

Still, none of this matters without the router as your network's traffic cop. It has to make sure all that data which streams in and out of your home or office, get to the right internal or external network address as quickly and efficiently as possible. Wireless traffic streams in from phones, tablets and other devices, competing with wired requests for other data. If you have a DVR or two, you may also want to transfer a movie from one room to another. This is an increasingly common convenience. When we start moving around HD video content, even from within our home between televisions, this adds real overhead to the network. Oh and if you are using VOIP (Voice Over IP) for your traditional telephone calls, either through your ISP, or some third party company such as Magicjack, your router has to keep your conversation flowing, and this data, while juggling all of the other traffic.

We expect all of this to happen all the time (and "it should just work"). My newly defunct Linksys router made it about three years of pretty much tireless service. In fact, after being properly configured, I haven't had to do much over the years to keep it working according to specifications. For most home and SOHO users, this magical "box" will run you a C note or less. Like many things in life, getting the least expensive  available router may not prove satisfying or economic over the box's two to three year lifespan....

Which brings me to some takeaways:

There are plenty of other features to consider, but focusing on these big issues will steer you in the right direction. Don't rely on "the kid" at your box store to know all of these nuances. S/he is probably not a networking expert and even if they claim to be (flag!), they don't know your specific needs. Oh, if you are tempted to use Red Laser or Amazon Price Check to see if you are getting the best deal possible while you are waiting to check out, don't you will only be frustrated! Do your homework now while you have internet access! and just satisfy yourself that getting your networked life back on the road is worth a little premium (after all, Best Buy needs our business too from time to time).

Anyone in the market for a slightly used, barely functional, three year old Linksys router? I have a deal for you!

As always, I invite your comments and thoughts below! If you like this article, please plus one, share it on Facebook with your network, Tweet it, or find another way to spread the word.


I currently hold investment a position in $AMZN. I currently particpate in the Amazon Associates Program and certain item links included within this post may tie to this affiliate program.