Is TIVO Becoming a Footnote in the DVR World?

I am an avid TIVO fan! Not DVRs, TIVOs! Over the years I have purchased four Tivo units, four lifetime subscriptions and several additional boxes as gifts to friends and clients. This is a big personal investment in one company's vision.  My home still has more TVs than Tivos and I find myself annoyed when I occassionally use a box without the complete Tivo experience. I even find myself wishing my car's XM satellite radio offered the instant pause and rewind functionality when I am listening to talk radio and my attention is drawn away from the discussion. (I am aware that XM has some portable systems which offers some of this functionality, but it certainly isn't baked into my car's system.)

Tivo has entered our lexicon in the same way that Kleenex and Xerox have become generic terms. Tivo created the market for DVRs. So what has me upset? Here's the "news" out of CES from Tivo. There are plenty of details reported by Engadget and others, but in broad brushstrokes, Tivo has announced:

What's not to like? CES has long been considered one of the annual events for showcasing new hardware. In this context, Tivo's offerings are incremental improvements, not headline grabbing revelations. No new hardware; no two way communication solution between Tivo users and cable companies; no groundbreaking partnership announcements. Nothing to make me go, "wow!"

Compare Tivo's announcement against DISH network's offerings (aka, "The Hopper and Joey"): A new DVR powered by a powerful Broadcom chip capable of simultaneously recording six satellite streams on a two terabyte internal drive (this is the equivalent of about 2,000 hours of programming).  Tied to this new, gargantuan, DVR, are satellite controllers (Joeys) which allow simultaneous use of all the DVR's functionality in a total of six locations! The Kangeroo may well supplant the iconic  Tivo  character as the mascot of choice for couch potatoes this year.


Compare Dish's new offering to Tivo's top of the line Premiere Elite which is capable of up to four simultaneous recordings, capturing about 300 hours.... This hardware costs $500 PLUS a monthly service charge of an additional $500 "for life" (of the box) or $19.95/month; that is a cool $1,000 per unit! Where's Tivo's "Joey?" Well, there isn't an equivalent. Tivo allows streaming across your home network but you need a second, full featured,  full cost, Tivo box to view the content.


Then there is the content itself. Without diving into the cable versus satellite pros and cons (and I know there are passionate feelings on both sides of  this discussion), Tivo relies on cable providers to feed its boxes. Comcast, as an example, now charges about $90 a month (plus taxes, etc.) for a basic, High Def, cable package. Comcast also charges a monthly fee for each multicast tuner card you "rent." This adds another $8.50 per Tivo (or $17 for a dual tuner Tivo such as the Premiere Elite-- each multicast tuner can drive two video streams) per month! Multiply this by a six room set up and you would have an additional $100/month is hardware rental fees!

On the flip side, Dish is announcing $79.99 / month for Dish + Broadband options at CES as I write.  Comprehensive hardware and installation pricing isn't available as I write this article, but Engadget, a typically reliable source is quoting,  Installation prices will start at $99, with bundles starting at around $80 per month.  I suspect  there will, at minimum, be some type of monthly surcharge for each Joey and possibly even a one time, up front, fee for the Hopper (which may be offset or waived with the completion of a multi-year bundle contract ).

Any firm comparison of pricing is a bit unfair given Dish hasn't published formal rates. However, I can say that for comparitive purposes, Tivo would require a $6,000 investment for six rooms ($500/unit plus $500/unit lifetime service) BEFORE paying for content!! Really!? Now diehard Tivo fans may argue that Tivo's interface has some bells and whistles lacking in Dish's design. Conversely, Dish afficianados can point to integration of Sirius Satellite music, Prime Time Anytime, and other tie ins as being superior. Tivo has valiantly defended its admitedly wonderful user experience which many have tried to emulate (AT&T!) and Tivo triumphed already in some of these legal, patent, skirmishes. But one thing is sure, the user experience is converging and Tivo's business model of separating hardware, "software/data" (guide information) and content makes less and less sense from consumers' perspectives.


In terms of sheer capacity (tuners, recording capability, room coverage) Tivo is clearly in second place. Given Tivo's pricing (and  yes I am using the top of the line unit as comparison, but only the Premiere Elite comes "close" to the Hopper in terms of functionality), I could pay an $100/month premium over five years for the Hopper, five (5) Joey satellite units and menu/guide content! I suspect Dish will make the economics of this choice painfully easy for those analyzing with their pocketbooks. I will be surprised if the differential doesn't end up in Dish's favor by $5,000 or more over five years!


Tivo doesn't even offer long time fans like myself an upgrade path! No transfer of "lifetime" service to new hardware, no "thank you" for over ten years of acting as an unpaid salesperson, no recognition for buying an additional five or six boxes over the years as gifts (and adding to the company's user/fan base). Nada. 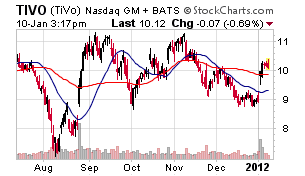 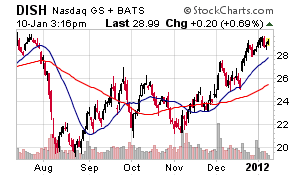 Tivo's stock has shown some upward activity of late. However, it has been trading in a relatively narrow range for months. The company actually has a market capitalization 10% of Dish. (1.29B versus 12.9B). While the two stocks have shown a high correlation in trading over much of the past year, there is a distinct divergence over about the last month with $DISH  showing a more bullish trend and positive return (please see nearby charts).


Tivo's lack of more dramatic announcements at CES, coupled with uncompetitive pricing, make this stock look more and more like Kodak-- an iconic name, an industry founder unable to adapt and compete in a changing, digital, world. Both companies may now have more intrinsic value in the various patents they control than the products and services they offer consumers. Both companies' futures may well end in acquisition for patents or bankruptcy (another reason to think long and hard before buying a lifetime service agreement for that "next"  Tivo appliance).  Sadly, AT&T's recent settlement agreement with Tivo of $215 million has probably done more to spur interest in $TIVO than the recent CES announcements.

Based on recent events, I believe the next  DVR in my casa will not be a Tivo. There are so many alternatives and more and more users are considering cutting the cord from traditional bundled media packaging altogether. Microsoft's CES announcement of Xfinity availability via the xBox offers yet another potential means of bypassing a Comcast digital set top box or multi-stream card. I hate to consider giving up the great user interface and other Tivo features, but the company seems to make the decision easier and easier. As for an investment, I see a short play and a long position....


I currently hold no investment positions in $TIVO, $DISH or $CCS. I do not use DISH services but am a Comcast subscriber and long term Tivo customer.


This commentary is not meant as an endorsement of any company or to provide financial advice.  If the author has any financial interest in any company mentioned at the time of this article’s posting, it will be explicitly noted. I welcome feedback and comments.