A Look At Google's Future May Have Sergey Walking Music Row Wearing One Cool Pair of Shades!

Having a company with the name Music Row Tech and living in Music City makes converging news stories spanning music and technology of especial interest. I was surprised to read that one of Google's founders, Sergey Brin, has announced his impending retirement. Apparently, his passion for blues guitar is consuming his other interests.  Sergey may be a Music Row neighbor in just a few years. I for one can't wait to witness how Sergey applies his creativity and passion to music recording and publishing. With his wealth, he will be able to follow his dreams without having to adhere to the staid rules and at times stultifying bureacracy which all too often seems to inhibit the transformation of musical passions to commercial product.

Speaking of new Google realities, the nearby video is simply too tantalizing not to share! (Thanks to +TechCrunch, +Gina Trapini, and others on Google+ for first bringing this concept project to my attention!) If this peak at how Google envisions the future doesn't make you sit back in amazement, you probably are reading the wrong blog!

On another front, and more serious note, I believe Android is in real trouble (despite the growing market share numbers). I am not alone. Android is only bringing $183 million to Google's bottom line. For some companies, this would be a mind boggling total revenue number, but taken in context of Google's mobile ad income of $2.5 billion, Android's contribution approaches a rounding error. In fact, by the company's own admission, it makes many multiples of this amount on searches conducted on various mobile Apple iOS devices. Of course, Apple's open hostility to Google is well reported. Siri is a major salvo in this war. Searches conducted vis a vis this "virtual assistant" remove Google from the search equation and Siri's introduction is a significant step in Apple's efforts to become a player in  search. For whatever reasons, users of iOS devices conduct many more online search queries than Android owners (and therefore represent a richer source of online ad revenue to Google on an absolute and  per user basis). But this isn't Android's real Achilles heal. Google has lost control of the update process and I don't see how they put the genie back in the bottle. 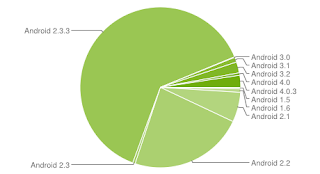 Fragmentation, the sheer number of devices "in the wild" running various flavors of Android is breathtaking. As the nearby chart shows, the vast majority of Android consumers are using devices running 2.2 (Froyo) and 2.3.3 (Gingerbread). Less than 3% are running the newest release, 4.XX (Ice Cream Sandwich)! Google has already pre-announced yet another iteration release, Jelly Bean (5.0), which could be available as early as this summer!

What is a developer to do!? If you design and support the newest release(s) you dismiss the vast majority of current user devices and all the associated income. The breadth of devices, manufacturers, and version features makes supporting all flavors of the OS virtually impossible. By allowing everyone from Amazon (whose Fire tablet runs a heavily modified version of  Android) to HTC to build on the  Android platform as they wish, Google is losing the developer war which in turn bodes badly for the hearts and minds of customers (particularly in more developed countries). Compare this hodge podge of operating system support with the very streamlined upgrade path Apple's iOS offers and it isn't hard to understand why software developers migrate to the land of Infinity Circle. This post by Jason Perlow. a frustrated Android lover, expresses these concerns quite well.....

The end of Android certainly isn't the end of Google but this is a high stakes battlefront; mobile search is where the future is and the switch from desktop dominance is happening at an ever accelerating pace. Google's recent announcement that they are directly entering the tablet market with its own device may be the fork in the road. Abandon Android's SmartPhone to the manufacturers and carriers while exercising direct, tight, control over future tablet development. With the exception of the Motorola Zoom and the Amazon Kindle  (which in many ways is an Amazon Tablet by birthright only), Android has failed to capture market share or consumer enthusiasm.

Tablets don't require tight integration with wireless carriers so many of the problems the company ran into when it attempted to directly sell its excellent Nexus SmartPhones should not re-materialize. Google's merger with Motorola could also provide some internal hardware manufacturing expertise (whether they outsource all of the component development or not) absent when the Nexus Phone was launched. There are at least two fronts in the tablet wars to attack-- lower cost Amazon Fire competitors and the high end iPad market. In my opinion, this move to control tablet development is Google's best chance to reinvent Android in a way which draws developers and consumers back to the fold. Who knows how this product will be branded (Google Play is a popular bet!), but the consumer will surely be the winner when the roll out begins.

I currently participate in Associate Programs and certain item links included within this post may tie to these affiliate programs. By using these links, you help support Music Row Tech, I appreciate your support.

I have a long positions in $GOOG, $AMZN, $AAPL

at 1:39 PM
Email ThisBlogThis!Share to TwitterShare to FacebookShare to Pinterest
Labels: Android, Google