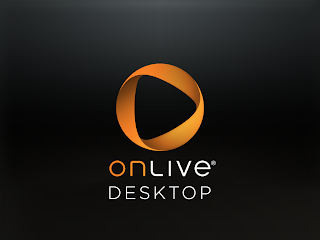 Isn’t it wonderful to finally have full access to Office 2010 from an iPad!!? I am writing this post on a full blown Microsoft Word desktop. I am not sitting at my quad core workstation tethered to my high speed internet connection and big screen monitor.

I am not running some Microsoft based iPad version of Office. Rather, I am using a new, currently free, incarnation of Office 2010 through Onlive on an iPad2.

This application is a fantastic marriage of portability, functionality, and connectivity.  For many, Onlive may be the final bridge between office centric documents and the wondrous, disconnected world, of Apple’s design.  For others, Onlive’s vision may still fall just short of Shangri-La  but for most Office users (whether  you  are a decades  old Office aficionado who can’t write a short,  paragraph long, memo without using Word  much less create a spreadsheet for your next start-up without Excel macros and pivot tables, this is likely a game changer.

First, a couple caveats. I am a touch typist and nothing, I mean nothing, is going to get me to write a post of more than a few hundred words, much less the next great American novel using a touch screen keyboard. It doesn’t matter how well, or bad, an onscreen keyboard might be designed. I couldn’t even log in to an email account using Blackberry’s early touch screen keyboards without wanting to throw the ‘phone across the room. The iPad’s touchscreen keyboard is good, better than almost any other design I have tried, but without tactile feedback, being a touch typist is a liability, not an asset. Add to this hardware issue Office’s keyboard centric design and I think even the staunchest Office user will be frustrated using Onlive’s service extensively without a solid Bluetooth keyboard such as Belkin’s case. With all due reverence to the late Steve Jobs, some tasks demand a classic keyboard (the fact that iPads with keyboards are supplanting MacBook Airs in many situations is the subject of a future post!). So you will want a keyboard and even then touch typists will find many keyboard  shortcuts don’t work in the time honored way we have learned through the years (or decades as the case may be).

Secondly, any desktop customization you may apply will not be preserved between sessions. This is more than understandable from Onlive’s perspective; the company is trying to deliver a great user experience to the masses and standardizing the desktop is one way to more easily accomplish this (for free!). This limitation may well be eliminated in a future premium, fee based, version. Time will tell. For now, this falls more in the “you ought to know” category than as a deal breaker of any kind. Just don’t spend time customizing your personal dictionary, ribbons, or other features and you shouldn’t get frustrated 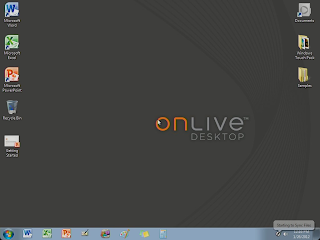 Since Office itself isn’t currently “touch friendly,” you will find yourself moving from keyboard to screen and back again with some frequency. After a bit of time this may become second nature, especially to those of us who rely on Office on our desktops yet spend increasing amounts of time glued to our iPads for  much of our lives. One can only suspect, and hope, Microsoft will update Office to better live in a tablet “world.”

Increasingly, I think of Microsoft as the lumbering elephant traipsing through the technologic playground ignorant of the world unfolding but I think  even the egotistic, Mr. Ballmer, has to see that the world is passing by and Microsoft divisions need to adapt or die. In fact, Microsoft's recent release of SkyDrive for iOS is welcome! (This service provides 25 Gigabytes of storage for free and is accessible virtually anywhere you have an internet connection.) Still, if is Onlive, not Microsoft, offering Office 2010 to the legions of iPad users!

One final disclaimer, I had hoped and read in other posts (I believe but didn’t document this point) that Onlive allowed you to run Internet Explorer through this virtual desktop.  To date, I haven’t found a way of accomplishing this feat. Candidly, the only reason for my interest in this feature is to satisfy another issue several clients have confronted me with since the iPad’s introduction—How to deal with a few critical web sites which rely on Flash? Steve Jobs railed against Adobe Flash for its security and environment (i.e. memory and battery usage) failings. I always believed he was correct in his criticisms and Adobe’s recent announcement that they are abandoning mobile Flash development supports Steve’s assertions. Still, many clients rely on a few sites for mission critical work and the lack of Flash support on the iPad has held back more widespread adoption in some of these organizations. Onlive could still provide the bridge to this solution until all sites migrate away from Flash to HTML5 or some other tablet/mobile friendly technology.

I believe in getting the problems stated upfront. Now the good news!

Onlive provides Word, Excel and Powerpoint access for free and it is a very good experience! There is a desktop app which allows you to sync files. Also, please note that you have to initially sign up for your account through the desktop (or mobile browser). Currently, there is no way to initially apply for an account through the iPad App directly. The signup process is fast and not a hassle, but you need to be aware of this step. Dropbox, and other file sharing programs, are not supported.  This too is a minor inconvenience if you are used to one of these services but Onlive’s storage space is more than adequate for most user’s needs. You need to use Onlive's virtual desktop to get your files onto Onlive's servers.

The virtual desktop allows you to open any Office 2010 compliant file. You can read, edit, change and save these files to your heart’s delight.  Your free Onlive account allows you to save 2 Gigabytes worth of files. For reference, this Word document post is just over 16 kilobytes…. That is a lot of typical documents and spreadsheets! I would assume that a premium offering would increase this storage size further.

Onlive’s roots are in online gaming. Their servers allow you to play complex, video intensive, games on a variety of platforms. So even if you are a spreadsheet ace and not a master of Assassin’s Creed Revelations, you are benefiting from some bleeding edge server technology when you use Onlive’s iPad applications. 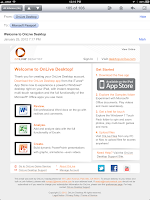 You can download the iPad App through Apple’s Store by  using this link.

I currently particpate in the Amazon Associates Program and certain item links included within this post may tie to this affiliate program.


I hold a long position in  $AMZN